I was teaching this morning — a small course in grammar — when I was struck with how cool pronouns are because of how much they tell us about the mind. This is one of those things, like the double-slit experiment where the phenomenon can be easily observed, but the underlying mechanisms are actually pretty complex.

So let’s start off with a question, and some observations.

Basic question: why do we we use pronouns in general?
Follow-up question: what happens when we don’t?

Observations:
Let’s take a small invented passage, where, instead of using pronouns, we use the full form of the nouns. (Not actually a quote, but I’m going to set this off in a block-quote.)

So what’s going on? Why are we so annoyed by this?

END_OF_DOCUMENT_TOKEN_TO_BE_REPLACED

I’m flying across the world to Micronesia to start my new job as a professor of linguistics at the University of Guam!  I am beyond excited!  Exclamation point!

(Changes to the About and CV pages coming soon.) 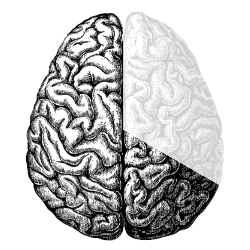 It seems like every exam I’ve given I scramble to find a clear and easy-to-use clock and countdown timer. (I like to project these in the lecture hall so students can pace themselves (or panic, as appropriate, when time is running short).) So I whipped up one of my own. Displays current time on the left, and the remaining time in a “1h 2m” remaining format. Also sweeps out a decreasing arc of brain as the time decreases.

Feel free to use, adapt, steal as you please.