When I was young, I decided to make a thorough tour of my local library by starting at Dewey Decimal 000 and working my way up. I didn’t get too far because I got very wrapped up in 110 – Metaphysics and 130 – Parapsychology. Aside from books discussing psychokiesis, ESP, ghosts, and transmutations of the soul, there were books that discussed various states of consciousness and the (miraculously extensible) limits of the human body. This is where I first learned about things that continue to exist on the fringes of science, but that seem to be reaching more into the mainstream public’s spotlight of attention — lucid dreaming, cryonic preservation, and sensory deprivation, among others.

In works mentioning sensory deprivation, John C. Lilly’s work was inevitably highlighted. In the 1950s, while working at NIMH, Lilly — yes, the same Lilly that gave LSD to dolphins in the name of science — was at the forefront of a whole cadre of scientists investigating the effects of sensory deprivation. Although most of those scientists concluded that sensory deprivation was harmful and caused distress, Lilly was one of the few to realize that the methods employed by those other scientists were suspect. In an early lecture on isolation tanks reproduced in Tanks for the Memories, 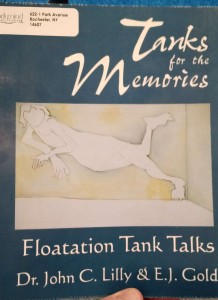 Lilly notes that others were strapping participants into chairs and forcing them to stare at blank walls, having them lie motionless in artificial respirators (iron lungs), or placing paper over their participants eyes while shining a bright light against the paper and playing loud white noise in the background (deprivation through masking stimuli). Tellingly, none of those participants asked to repeat those studies, particularly as prolonged sitting in one position can produce considerable discomfort / pain. Lilly’s method was notably simpler — put people in water in the dark. Much like me, Lilly was the type of scientist who believed that if you are going to subject people to an experiment, you should run yourself in it as well (excepting things like drug therapies tailored to certain illnesses, of course), and he and his wife subjected themselves to hundreds of hours of accumulated isolation time. They found they were absolutely hooked on it. Likewise, participants begged to be able to participate again and again, and from there, the whole thing took off. Lilly found himself building tanks wherever he went and making converts of those who tried it (including physicist Richard Feynman!). In the public’s hands, though, reports started getting more… mystical. People reported visual hallucinations, sudden healing, out-of-body experiences, spiritual breakthroughs, the ability to see into the future (<– I kid you not)…

Clearly, I was interested in trying it for myself.